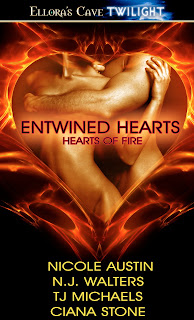 Entwined Hearts by Nicole Austin, N.J. Walters, T.J. Michaels and Ciana Stone is available today from Ellora's Cave! This is the fifth and final book in the Hearts of Fire series.
*
Each of the first four books can be read as a stand-alone book. Entwined Hearts is the culmination of the four couples adventure as they face evil one final time--this time together!

Book five in the Hearts of Fire series.

The Chosen. Eight strong individuals gifted with unique paranormal abilities and tasked with protecting shards of an ancient crystal—the Heart of Fire.

Brought together by destiny, each couple has managed to bond and fuse their crystal pairs through a hot and intense sexual joining. The four couples have overcome great personal challenges and remained apart, preparing to face an ancient evil once again.

Now the time has come for the eight Chosen to join forces and defeat Asmodeus, Prince of Hell, once and for all. Their plan is clear yet complex—activate a hidden energy network, gather on spiritual lands and fight an epic battle between good and evil, which will impact mankind for eternity.

Of course, nothing ever goes as planned. And Asmodeus has some tricks the Chosen never anticipated.

Congrats on your release.:-)

Thanks so much, Kat.

Congrats on the new release, NJ. :)