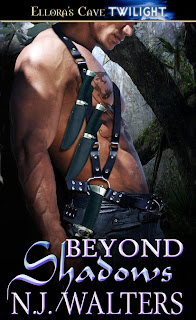 Beyond Shadows is the second book in the Shadow Ryders Saga. These immortal, shape-shifting warriors have their hands full with the women they're sent to protect.

I loved Blade from the first moment I saw him in the Shadow Realm. An assassin, he has no equal when it comes to his weapon of choice--knives, of course. He's stubborn, defiant and definitely has his own way of taking care of business.

Sequel to “Shadows Stir” from Dreams of the Oasis IV anthology.

An immortal warrior of the Shadow Realm, Blade’s self-control has been honed to a razor’s edge by centuries of fighting, but it vanishes the moment he lays eyes on Jacqueline Harris. The mere sight of her stirs his blood and he craves physical pleasures long forgotten.

Jac is an accountant, not a risk taker, preferring to live her life quietly. That all changes when she is sent to see a client by mistake and stumbles onto a crime ring. Now she’s on the run for her life.

The sexy stranger appears at her beach house, swearing to protect her at all costs. Dark and dangerous, he resembles the assassin she first fears he is. The last thing she expects is that he can morph into the deadly panther tattooed on his chest. The undeniable passion between them flares to life, but it is more than attraction. It is a soul-deep knowing that he will change her life forever. Blade becomes both protector and lover, but it’s up to her to save him from the shadows that haunt him.

I loved this story. And I also have to say you have a really SEXY cover. Yum.

*g* Thanks, Kat. I love this cover. It's perfect for Blade.