I'll admit that I've taken a few days off work this holiday season and indulged in some reading. The first two books are part of the Ellora's Cave Wild Winter Quickie series.

Melaniece is looking forward to spending a nice quiet holiday at her vacation home up in the mountains. Expecting to enjoy ripping open gifts with her family, she's surprised when they spring the ultimate present on her — Michael Bannon. Could his unexpected appearance have anything to do with the strange vampire dreams she's been having lately?

Michael is determined not to blow a second chance with the woman he should have loved years ago, even if it means revealing his true nature. Is a good guy willing to be very bad to get what he wants? Hell, yes…including drive Melaniece out of her mind. Over and over again.

Studying polar bears is Norwegian scientist Aud Myhre's passion. The leader of an Arctic research team, she stays in the frozen north over the holidays to obtain necessary data, with help from her sexy colleague Svein. She didn't count on a storm trapping them in a cave with no means of warmth — except each other.

Aud struggles to keep their relationship professional, but there's no fighting their combustible sexual chemistry. Svein Eide has more insight into the lives of polar bears than anyone knows. To keep Aud safe from the storm, he has two choices. Reveal his shapeshifting abilities and lead her back to camp, or find another way to keep her warm. He knows which he'd prefer. Polar bears don't mate for life…but one taste of Aud's passion could disprove that scientific fact.

Both of these books are quick, sexy reads.

Mary Winter's offering is an original shapeshifter story that packs a wallop. Svein is certainly a hero to cuddle up next to if you're caught in a storm. I really enjoyed both of these books.

Book 1 in the Phantom Warriors series.

Bacchus is a desperate warrior. Saddled with the quest to find a sexually compatible female race for his Phantom people, he journeys to Planet Earth. There he discovers a world teeming with women, but there's only one way to determine if any of them are a biological match. He must pick one and mate with her. Sex sounds easy enough and it would be, if Bacchus wasn't from the Blood Clan. Where on Earth can he find a woman who doesn't freak out at the sight of three-inch fangs?

Jill has had a rough year. She's lost her brother and has been dumped by her fiancé. When Bacchus shows up at her door, he changes her whole world.It'll take more than Bacchus' chemically charged pheromones, dominant nature and forked tongue to get the job done. He will have to release all his animal instincts to convince Jill to let him give her the ultimate love bite.

What more could a woman want than to have a man who treats her as if she is indeed a treasure worth protecting and cherishing. The fact that he is sexy as all get out and has a forked tongue that he knows how to use only makes it all the more interesting. This is one sexy, passionate tale that you won't want to miss. One can only hope that there will be more Phantom Warrior books!

Book four of the Witches Knot series.It all started with a deck of tarot cards. Holly knew she had some kind of magical gift but she had always been forbidden to even speak of it by her now-deceased mother. Alone and suddenly free to explore her curiosity, Holly spreads the cards and has a vision and the first piece of the puzzle falls into place.But suddenly she's a target of an attack and two hotter-than-hot vampires burst in to protect her and claim she's their mate.

Even as she finds it hard to believe these two alpha vampires want her in their bed as well as their lives, she falls under their spell and begins to believe that she just might be worthy of love after all.But there's no forgetting that she's got a past and a lot of unanswered questions, and her ignorance is putting her at risk. It's a journey that takes her from Seattle to New Orleans, where she confronts her past and embraces her future.

You all know by now that I am definitely a Lauren Dane fan, and her latest installment of her popular Witches Knot series just reinforces that. Emotional, poignant and downright HOT, this paranormal story delivers the kind of complex tale that you expect from this writer. Fans of this series will love Thrice United. It can be read alone, but I'd encourage you to read the other three first. You won't be disappointed.

Becky Blake is through with vibrators. Well, to be honest, her vibrator's through with her. The damn thing actually conked out, mid-fantasy. Time for desperate measures. Armed with thirty pounds of candles and a spell created by her best friend and strip mall witch, seh heads into the desert to conjure a man.

It's freezing, dark and more than a little creepy. On top of that there's a coyote hanging around howling loud enough to scare her to bits. Please, let this spell work.

Rick Frazier's done with manipulative women. His ex-wife is bleeding him dry. His wallet is almost as hungry as he is. It's time to get a second job, as a bartender at 'The Buckin' Brocno All Male Review'. At least it will pay the bills until he sells his software program.

Their chemistry is magnetic, drawing them together in a lightning blast of hot passion and incredible sex. Is this true love or the result of a magic spell cast on a cold dark night?

Newcomer, Nancy Lindquist has penned a tale for Samhain Publishing that is orginal, funny, poignant, incredibly sensual and downright sexy. Both Becky and Rick are very real characters with faults and hangups. The Buckin' Bronco makes a fantastic backdrop as Becky and Rick's relationship unfolds. Filled with memorable secondary characters and a touch of magic, this is a book well worth checking out. Can't wait to see what Nancy Lindquist does next!

If you're looking for some reading to heat up those cold winter's nights, you can't go wrong with any of these great books!

Mmm, good reading! Bacchus is so hot, and the second Phantom Warriors book is out now, too! Can't wait for #3, woot. I hadn't read Nancy's book, it sounds like a good one to pick up.

Wow! Bacchus was on my TBR list for so long I must have missed that the second book was out. Thanks for the heads-up, Charli.

I think you'd really enjoy Nancy's book. It was fun and very sexy!

Thank you so much, NJ! You're such a doll. I loved Gift Wrap Option and Bacchus too!

You're welcome, Lauren. This was another fabulous book! 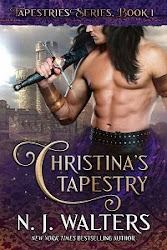