Seeking Charlotte and a Guest Blog! 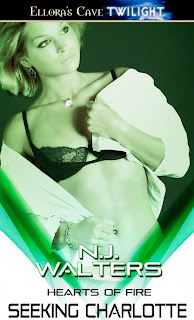 Seeking Charlotte is available today from Ellora's Cave. This paranormal/erotic romance can be read as a stand-alone book, but is also part of the Hearts of Fire series.

I'm also guest blogging over at Tracy Cooper-Posey's Blog today. Stop by and check it out and you might win a free download from my backlist. Winner's choice!
*
If you love a hot bounty hunter, powerful crystals, demons and destiny, then this is the book for you!

Books 1 & 2, Memory's Eye and Shards of Ecstasy, are also available from Ellora's Cave.

Creed Lawson knows Charlotte Jones is trouble from the moment she presses her lithe body to his and kisses him. But that doesn’t stop him from taking what she’s offering—a night of hot, uninhibited sex. But Creed hasn’t bargained for the feelings she stirs in him, nor the talk of crystals, demons and destiny.

Charlotte is an empath. The ability to feel people’s emotions has made it difficult for her to lead a normal life. At eighteen she received one of the eight pieces of the Heart of Fire, a crystal that contains untold power. She was told there was a male who held the other half of her stone, as well as a demon that coveted all the pieces of the crystal.

The demon has finally found her. But she knows that Creed is the special man she’s been waiting for. Charlotte is facing the fight of her life. Will Creed fight beside her or walk away?

My Ellora's Cave Quickie, Tempting Tori , will soon be available in Audio Book! Look for it on May 10th from Ellora's Cave.

Standing in the barn, looking out over his ranch, J.T. Courage knows there is nowhere else on earth he’d rather be. He has his brothers, a successful horse business and a new home on the land that’s belonged to his family for generations. The only thing missing is someone to share it all with. And he has just the woman in mind.

Victoria Abrams is leaving the man she loves. She can no longer pretend he will one day see her as more than a friend or housekeeper. But J.T. is not about to let the sexy woman who has tempted him for months with her lush body and beautiful face slip away without a fight.

Download a Free Sample
Posted by N.J.Walters at 19:02 5 comments:

Want to know more about Seeking Charlotte before it's released from Ellora's Cave this coming Friday? Then go to TJ Michael's Blog and check out the interview with the hero and heroine--Creed Lawson and Charlotte Jones.
Posted by N.J.Walters at 10:41 4 comments: 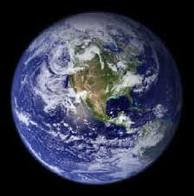 It's the 40th Anniversary of Earth Day. Today is a day to reflect on where we live and what we can do to help save this little blue planet we call home.
*
We can all do our part. Change your light blubs from the traditional ones to energy saving ones. Use cloth bags for grocery shopping instead of plastic. Wash your clothes in cold water. Turn off the lights if your not in a room. Recycle, reuse, and think about what you buy before you buy it.
*
This is our home. It's time we started taking better care of it. The future is in green jobs, green energy and using our resources wisely. Think about how much better off we'd all be if instead of plain green lawns, brought about by tons of chemicals, we planted organic gardens instead. We'd help feed our families and cut down on chemical use. Hey, it's not radical. My grandparents and their parents did just that because they didn't have a grocery store around the corner.
*
We need to rediscover the best from the past and mix it with the best of the technology that exists today if we hope for our children and their children to still have a planet that can sustain them.
*
So celebrate the beautiful world we live in today. It truly is a miracle!
Posted by N.J.Walters at 07:26 4 comments:

All month, Shelley Munro has been posting Writer's Tips on her blog. She's had some wonderful tips from a variety of authors.

Today it's my turn. Drop by Shelley Munro's Blog and check it out!
Posted by N.J.Walters at 15:13 No comments:

Here's a snippet of what reviewer, Tina, had to say:

"I really loved this one for its love story, the spark between the characters, and the completely swept away feeling I got from reading this novel. Ms. Walters does an amazing job of making the reader emotionally invested in these three, so much so, I didn’t want to let them go at the end."

You can read the entire review at TwoLips Reviews
Posted by N.J.Walters at 07:09 8 comments:

The first one is for the second book in my Legacy series. Yes, the werewolves are back! This one is titled, Isaiah's Haven, and is tentatively scheduled for August.

The second one is for the first book in a new "magickal" trilogy: Spells, Secrets and Seductions. A Touch of Magick is book one. This book is tentative scheduled for late fall.

I can't tell you all how excited I am about both these books. More details as they become available. :-)
Posted by N.J.Walters at 07:04 7 comments:

I'm guest blogging over at The Romance Studio Blue Blog today and I'm taking about ménage a trois romances. Check it out!
Posted by N.J.Walters at 07:04 No comments:

I can hardly believe it's the 9th of April already. This month is really moving along, which means I need to get moving too. I'm planning on having my latest WIP finished by the end of the month. *fingers crossed*

I should hopefully have some good news to share next week. :-) I can't say anything for sure, but it might involve werewolves.

No plans for the weekend. I try to take Saturdays off from work, but Sunday I'll try to get some writing done. Don't know if that will work out or not. It's gotten harder to make myself work on the weekends these day.

Have a great weekend and I'll talk to you all on Monday!
Posted by N.J.Walters at 07:04 1 comment:

I'm guest blogging over at the Embrace the Shadows Blog today. I'm answering some questions about writing and talking about some of my paranormal and futuristic romances.

I'm a featured author over at The Romance Studio this month. I'm talking about my latest print release from Samhain Publishing--Jamesville Affairs. Check it out!
Posted by N.J.Walters at 07:03 No comments: 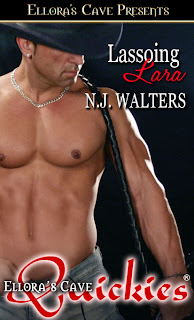 Check out the cover for my upcoming Ellora's Cave Quickie, Lassoing Lara. Some of you might recognize Brody as one of the other Courage brothers from my EC Quickie, Tempting Tori.

No release date yet, but I figured you might want a sneak peek at the blurb.

Brody Courage wakes one morning and finds himself naked and tied to his bed with no memory of the night before. If that’s not enough humiliation, his neighbor and childhood friend, Lara Jacobs is the one who rescues him.

When he finds a pair of red lace underwear, his memories start flooding back. He’d caught a glimpse of a matching bra when Lara untied him. She’s the sexy mystery woman who is now haunting his nights and his days. Brody wants a repeat of their night together, but Lara is avoiding him. There’s only one thing any self-respecting cowboy would do. He’s going to Lasso Lara and make her his own.
Posted by N.J.Walters at 13:49 2 comments:

Hope you all have a wonderful weekend with family and friends!
Posted by N.J.Walters at 10:41 4 comments:

The April/May 2010 issue is now available!

Check out the this month’s author interview with Tracy Cooper-Posey. As well, you'll find my husband's popular column: Confessions of a Romance Author's Husand, an excerpt, all the latest news and more!

As well, some lucky newsletter subscriber wins a prize. All you have to do to be eligible to win next month is to go to Awakening Desires Newsletter to join. While you’re there, you can check out back issues of the newsletter.
Posted by N.J.Walters at 13:32 No comments: