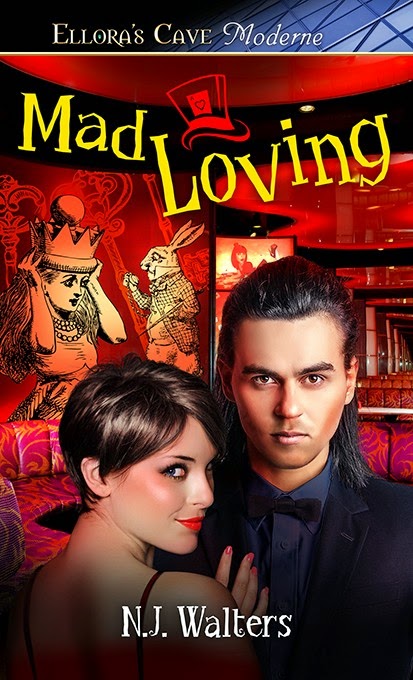 Be sure to check out my new contemporary/erotic novella.

PURCHASE FROM ELLORA'S CAVE
Posted by N.J.Walters at 12:43 No comments:

WOLF AT THE DOOR has received a 4 1/2 star review from Long and Short Reviews! 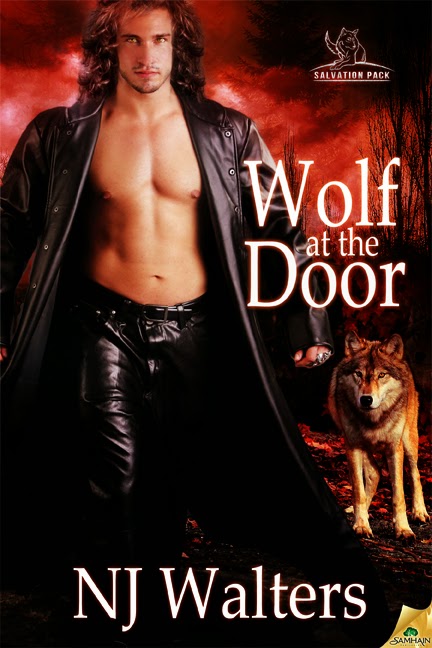 "There is passion, romance and also some danger in this. I like that the characters are, at times, vulnerable; not physically but often emotionally scarred and wounded, and that they are there for each other no matter what...Ms. Walters has written a fast paced roller coaster of a story, and I could not put it down once I started. I would recommend this for shifter lovers, romance lovers and I recommend you keep tissues and ice near to hand." ~Foxglove

READ ENTIRE REVIEW
Posted by N.J.Walters at 19:19 No comments:

Earth Day is an annual event, celebrated on April 22, on which events are held worldwide to demonstrate support for environmental protection. It was first celebrated in 1970, and is now coordinated globally by the Earth Day Network and celebrated in more than 192 countries each year.

This is an important day to remember that we won't survive if we don't take care of the planet that feeds and shelters us.

LEARN MORE HERE
Posted by N.J.Walters at 00:30 No comments:

MACNAMARA'S LADY is now in print! And look what I just got in the mail from Ellora's Cave. Aren't they pretty. *g* 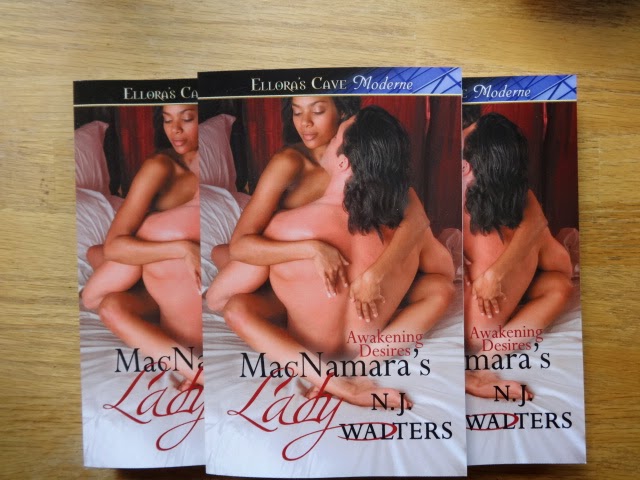 Missy Sinclair knows what she wants out of life—a secure job, a fine home, financial independence and, eventually, a man to share it with. That man will have class and style, share her goals and tastes and like fine wine and classical music. Why then is she so attracted to T.S. MacNamara, who is the complete opposite?

T.S. makes no apologies to anyone for his life. He’s worked hard to make his general contracting business a success. He likes beer and football. He’s not looking for anything permanent. Problem is, he can’t stop wanting Missy.

When he rescues Missy from a violent mugging, the seething physical attraction that’s been shimmering between them for months finally explodes. Classy and rough, dark and light, educated and blue-collar. Opposites attract—at least in the bedroom. But they both have secrets that won’t stay buried…secrets that threaten to drive them apart unless they’re both willing to face their pasts. 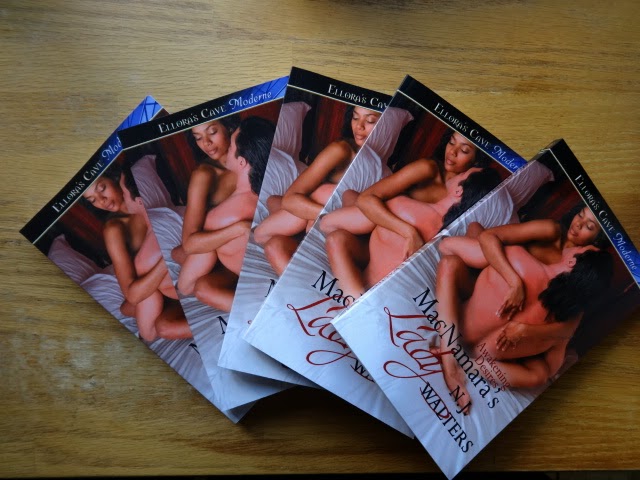 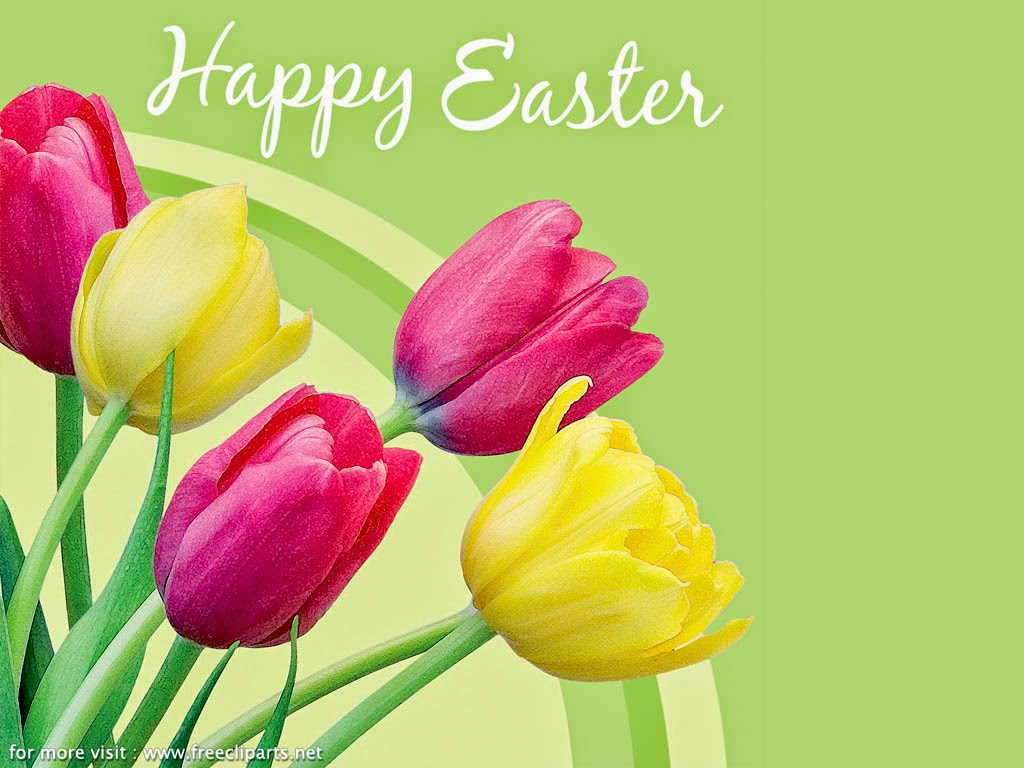 Wishing all of you a very safe and Happy Easter. I hope you enjoy the holiday weekend with family and friends. 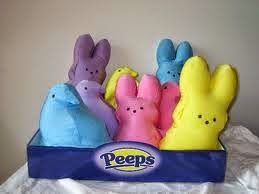 And I hope you all find some Peeps and chocolate bunnies in your Easter baskets. :)
Posted by N.J.Walters at 00:30 No comments: 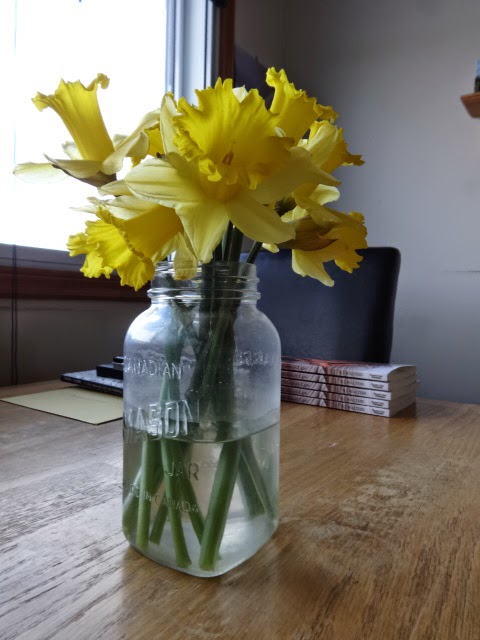 It's snowing outside today. This is the closest I'm getting to daffodils. Every April the Cancer Society sells them as a fundraiser. I bought some to brighten up my table.
Posted by N.J.Walters at 00:30 No comments:

Laurie Roma's April Symposium: The Story of Us!

This month Laurie asked her friends and fellow authors to think back and pick a favorite pairings or couple they have written, and share with everyone what made those characters so special to them. Find out what I and the other authors had to say!

LAURIE ROMA'S APRIL SYMPOSIUM: THE STORY OF US!
Posted by N.J.Walters at 08:34 No comments:

Wolf at the Door is Available TODAY!

I'm thrilled to announce that WOLF AT THE DOOR, the first book in my new Salvation Pack series, is available today from Samhain Publishing!


When this wolf comes knocking, there’s no turning him away

When Gwendolyn Jones inherits a Tennessee cabin from a great aunt she never knew, she quits her job and follows her dream to write full time. Meeting a stranger in a local cemetery isn’t a risk she normally takes, but she needs the information on his flash drive for an article she’s writing on werewolves. Later that night, when two honest-to-God werewolves come knocking on her cabin door, they’re definitely not Photoshopped.

Jacque LaForge is on a mission to retrieve a flash drive before it endangers his pack. He never thought he’d find a mate, but the chemistry between him and Gwen is unmistakably off the charts. Now to convince her he’s only trying to protect her from his vengeful former pack—led by his own father.

Gwen’s first instinct to flee only gets her a smashed car and a concussion. She wakes up in a dangerous new world she never thought existed—and in the arms of the one man who stands between her and certain death.


Warning: Contains a sexy werewolf and his small pack of friends, a paranormal writer who really didn’t believe such things existed—until now—and a completely dysfunctional family who are out to kill them both.

BUY FROM BARNES AND NOBLE
Posted by N.J.Walters at 00:30 No comments:

It's been a busy year so far and is going to get even busier. Here's a schedule of release dates for 2014 for both my print and ebook releases.

I also expect to have another one or two books releasing in 2014 from Ellora's Cave, including Wild Loving, book 2 in the Hatter's Club series.

Author Cassandra Curtis is having a WRITER'S CORNER EVENT: TIPS FROM THE PROS at her When Midnight Comes blog today. Lots of authors, including me, giving writing tips. Be sure to stop by.
Posted by N.J.Walters at 09:03 No comments: 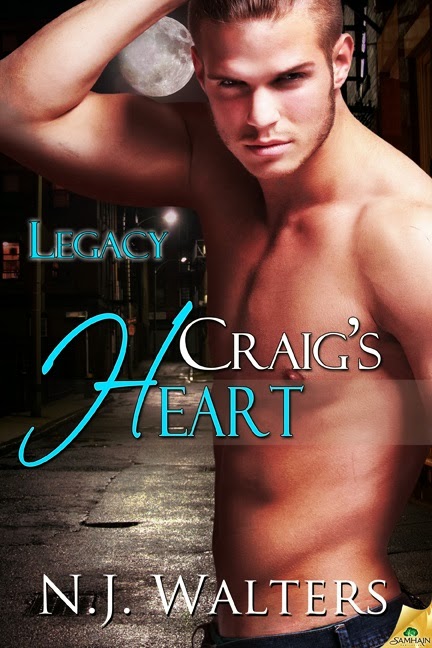 "NJ Walters is a goddess of words. Her Legacy World is open and welcoming, complex, and protective. The support Craig and Evie receive spreads through the pages and draws you into the group, with whispers from earlier exploits tempting you to venture into the past. But Craig and his friend Damek are always going to be the coolest vampires in the pack." ~Hollie

READ ENTIRE REVIEW
Posted by N.J.Walters at 12:30 No comments:

Mark of the Bear in PRINT!

MARK OF THE BEAR, book two of the Hades' Carnival series, is now available in PRINT! 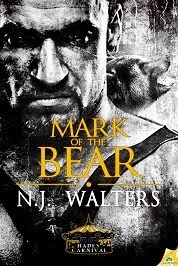 When the devil wants a deal, there’s no bowing out gracefully.

At twenty-nine, Hollywood scream queen Kellsie Morris is acutely aware the clock is ticking on her career. Luckily, the one big role she needs to pad her retirement fund has just come through—the story of an immortal, shape-shifting warrior trapped in a carnival run by the Devil’s minions.

When Kellsie arrives on set, she can’t resist climbing aboard an amazingly realistic carousel bear—and finds herself flung into a world where the horror is real. As real as the heat radiating off the half-naked hunk in her arms.

Marko has waited an eternity for the chance to free his goddess, the Lady of the Beasts, and his fellow warriors from an ancient curse. But once he lays eyes on Kellsie, he knows to the bottom of his soul that his purpose is to protect her life.

But in this hellish game, it’s the Devil’s move. And there’s no predicting when and where the final, brutal stroke will fall—and which lover will pay the ultimate price.

PURCHASE FROM SAMHAIN PUBLISHING
Posted by N.J.Walters at 00:30 No comments:

As always, some lucky newsletter subscriber wins a prize. All you have to do to be eligible to win is go to Awakening Desires Newsletter and join. While you’re there, you can check out back issues of the newsletter.
Posted by N.J.Walters at 00:30 No comments:

The wonderful Kate Hill interviewed me for her blog. I'm talking about writing, my latest book (Craig's Heart) and more. Be sure to stop by KATE HILL'S BLOG and check it out.

CLICK  HERE TO GO TO INTERVIEW.
Posted by N.J.Walters at 10:15 No comments:

This week the Tuesday Teaser comes from CAPTURING CARLY, which is part of the Awakening Desires series. Nathan gave me more trouble than just about any other male character I've ever written. He wanted to do things his way! He's one stubborn, determined man. 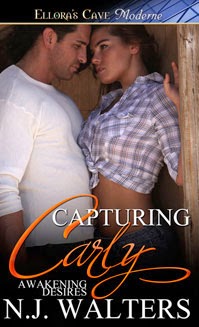 “You’d better run.” Nathan Connors growled as he pulled the vehicle to a halt in front of Carly’s house. He wasn’t sure if she’d heard him, but she had already jumped out of the truck and was running up the walkway. Her laughter trailed behind her, making him smile. That’s what she did for him. She made him smile, made him feel complete.

Grabbing his keys out of the ignition, he hurried after her. She already had her keys out and was unlocking the front door. God, she made him hot just standing there.

Carly Ames was five feet and three inches of pure temptation. Rounded in all the right places, her plain black skirt and white blouse hid a body that was made for sin. His mouth watered at the thought of tasting the sweet pink nipples that tipped her rather impressive breasts. He loved the way they hardened at his slightest touch. Her hips were wide, her ass a handful, and she made him hotter than a teenage boy with his first girl.

Glancing over her shoulder, she shot him a grin as she shoved the door open with her hand. When she saw him right behind her, it quickly widened into a genuine smile that was reflected in her blue eyes, which shone with happiness. She had light brown hair that was cut short for convenience as well as style, but it suited her round face and her small, tip-tilted nose to perfection.

She looked like an angel, but Nathan knew that beneath her angelic exterior lay a fiery temper and a wicked sense of humor.