Tuesday Teaser--Wolf in her Soul 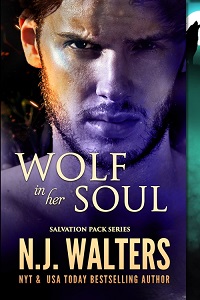 Reece cupped her face in his hands. Her skin was pale like porcelain, smooth and fine. A sharp contrast to her vibrant hair, which snapped with vitality. There were dark circles under her eyes. He looked into them until he was sure he had her total attention.


Then he slowly lowered his head. He figured there was about a fifty/fifty chance she might bite him, but what the hell. He liked to live dangerously. He pressed his lips against hers. It was like getting zapped with a million volts of electricity.


His entire body shook as he ran his tongue over the seam of her mouth. She sucked in a breath but didn’t pull away. She ran her hand over his upper arm, and even through his jacket and shirt, he could feel the heat of her.


He wanted to deepen the kiss more than he wanted his next breath, but he knew it was too soon. He didn’t want to spook her any more than she already was. When he pulled back, she was staring at him, her blue eyes wide and bewildered.


He smiled and tucked a lock of hair behind her ear. “Me showing you what I want to do to you. And, Hannah, I certainly don’t want to kill you.”

What character has been the hardest one to write? That's the question Coffee Time Romance asked authors this month.

Sharing an Excerpt over at the Sweet 'N Sexy Divas Blog

Check out an excerpt from my latest Tapestries book over at the SWEET 'N SEXY DIVAS BLOG.

Over at the Decadent Divas Blog

What happens when a woman's fantasy becomes reality? Drop on over to the Decadent Divas Blog to find out.

Teaser: The Seduction of Shamus O'Rourke

Shamus O'Rourke, from my Jamesville series, is one of my all-time favorite heroes. There is just something so special about him. The Seduction of Shamus O'Rourke was a turning point in my career in many ways. It was the first book at Samhain Publishing that I worked on with editor Heidi Shoham. We would go on to work together the next decade and dozens of books.

While I've worked with about a dozen amazing editors over the course of my career and have learned from each and every one, my working relationship with Heidi was special. I miss working with her. 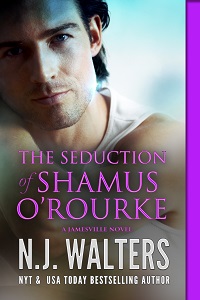 TEASER: THE SEDUCTION OF SHAMUS O'ROURKE


“A woman alone can’t be too careful these days.” His words echoed her earlier thoughts. “You stay put in the car and I’ll take care of that flat tire for you.”


“No,” she snapped. Realizing what she’d done, she softened her tone. After all, it wasn’t his fault she was attracted to him. All he’d done was stop and offer to help. “That’s fine. I’ll take care of it myself.”


He scrubbed his hand across his jaw and her eyes followed the action. She could see the five o’clock shadow on his chin. It made him appear even sexier, if that was possible. There was something elemental about this man. Even dressed in old work boots, faded jeans and a dirty T-shirt, there was an air of barely restrained power about him.


“I figured you could handle the problem on your own, ma’am, but there’s no need for that now that I’m here.”


Was he for real?

Love is in the Air over at Delilah Devlin's Blog

Love is in the air over at DELILAH DEVLIN'S BLOG. Be sure to stop by. 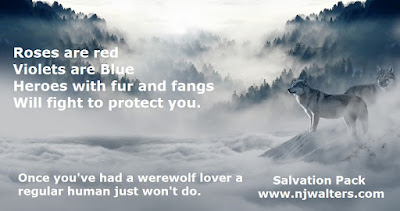 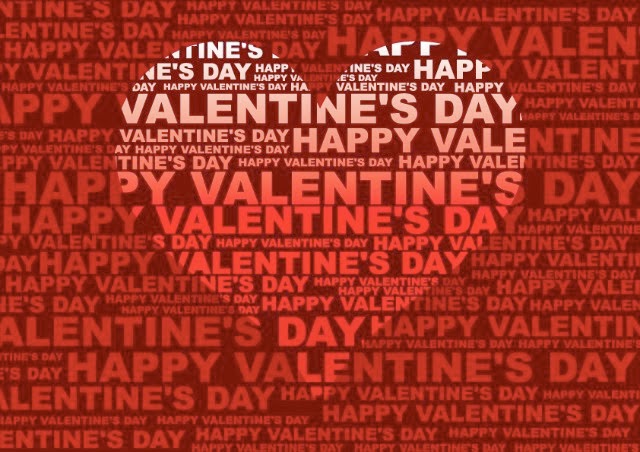 If you're part of a couple, I hope you enjoy the day with your special someone. If you're single, do something extra special for yourself. You deserve it!
Posted by N.J.Walters at 00:30 No comments: 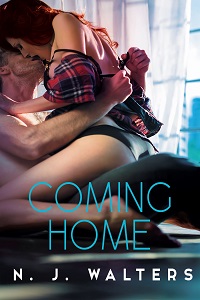 Have you read COMING HOME, my sexy contemporary novella? You can for only 99-cents.


“You want to take your hands off the lady.” Tobias studied the men. They were in their mid-twenties, both around six feet in height and they’d had the look of men who’d been in plenty of trouble. He knew the type.


“And you want to mind your own business,” the one holding the woman told him.


Tobias slowly shook his head. “Afraid I can’t do that.”


The man’s friend was getting twitchy and started to reach behind his back. Tobias moved, swung his body around and kicked out with his booted foot. At six-four he had very long legs. His size thirteen foot connected with the other man’s stomach and knocked him on his ass. His head bounced once against the concrete sidewalk and he didn’t get up.


Tobias turned his attention back to the other man. “Hurt her and you’re a dead man.” He might have given the better part of his life to upholding the law but there was one person in this world who’d he’d kill for. Die for. And this asshole happened to be holding her arm.


“Who the fuck do you think you are?” the man demanded.

“Someone you don’t want to fuck with.” Tobias didn’t want to draw his weapon if he didn’t have to. Firing a shot would bring attention and possibly even the cops. He just didn’t want the hassle.


He could fight the man but it might be easier to just make him go away. Tobias reached into his back pocket and pulled out a thin leather wallet. He flipped it open to display his credentials. “DEA. I can make trouble for you and your buddy for the next twenty years of your life or you can walk away. Your choice.”


The man released the woman’s arm as though it was too hot to touch. He backed away, his hands held in front of him. “Hey man. No need to get worked up about things. I was just trying to explain something to the bi—” He broke off when he caught the expression on Tobias’s face.


Tiring of the posturing. Tobias took a step toward the man. He stumbled back and almost tripped over the curb.


“Take your friend with you.”


The man on the ground moaned but his friend yanked him to his feet and the two of them disappeared down the road.


The woman stood silently beneath the streetlight and he drank in the sight of her. Her shoulder-length brown hair was gone, replaced by a short, sassy cut. And it was now cherry red. Such an obviously fake color shouldn’t have looked good, yet it suited her perfectly and enhanced the delicate features of her face. High cheekbones, a slender nose and porcelain skin made her beautiful. Her green eyes held intelligence and her lips turned up in a smile.


He closed his eyes briefly as the affection in her voice warmed him all the way to his cold heart. “I could say the same thing about you.”

It took every ounce of his self control not to shift and go on a killing rampage. The thought of some unknown man hurting Abigail made him want to roar, to lay waste to the entire city. No, the world.


Maybe a bit excessive, but he didn’t care at the moment. 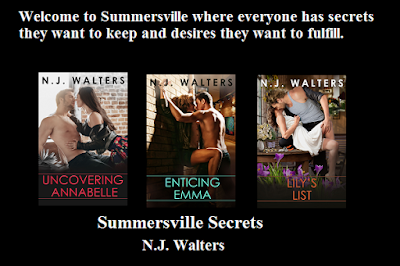 Have you read the Dalakis Passion vampire series? If not, it's not to late to start. 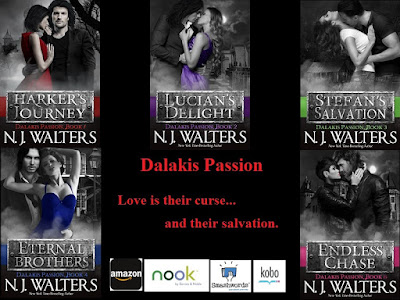 
The Dalakis brothers are unlike most men. They are vampires. Each one has searched through the long years for that one woman who can complete him. As the centuries pass, hope dwindles but doesn’t die. Finally the time comes for each brother to claim his woman. But danger is everywhere and there are enemies who wish to destroy them. Protecting a modern woman isn’t easy, but there is nothing these brothers won’t do to keep their chosen one safe. 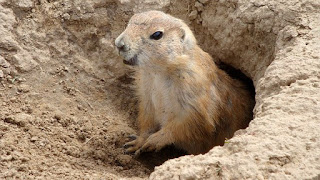 According to superstition, if the groundhog sees his shadow we have six more weeks of winter. if he doesn't see his shadow spring will come early.

I don't know about where you live, but we have at least eight more weeks, likely longer, before any sign of spring arrives. But it's nice to hope.

It's February 1st, also known as Imbolc. It's about halfway between the winter solstice and spring equinox. So spring is getting closer, even if it doesn't seem like it.

Hang in there and stay warm.
Posted by N.J.Walters at 17:52 No comments: