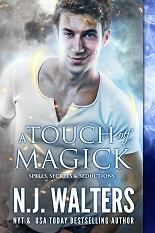 
There’s nothing practical about this magick

Rhiannon Sparks isn’t a very good witch, so when she slips up during a spell and calls for true love instead of a lover, she doesn’t think anything will come of it. But it seems that love has arrived along with Rhiannon’s newly unleashed powers, and she’ll have to learn to handle both or risk losing it all.

Deputy Ryland Stone is a realist. He believes only in what he can see and touch. But when he gets his hands on Rhiannon, sparks fly—literally. He can’t explain the instant connection they have, but Rhiannon’s explanation challenges everything he knows to be true.
ENTANGLED PUBLISHING * AMAZON * BARNES AND NOBLE * KOBO * iBOOKS 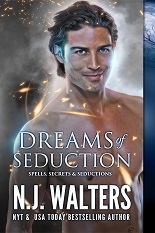 
She doesn’t believe in magic or love, until she finds both.


Maggie O’Neill doesn’t believe in magick, but she goes along with her friend’s spell calling for a lover because it seems like harmless fun. She’s left feeling strangely hot and bothered after, and then the dreams start…


Deputy Jed Bearson is a spiritwalker. He has a rule about never invading anyone’s privacy or dreams, but something pulls him to Maggie’s bedside, where he’s shocked to hear her crying out his name in pleasure. He’s stayed away from her for months, but no more…


Their connection is deep and hot, but Maggie’s reaction to Jed’s secret brings up a wall between them, and Jed wonders what she’s afraid of—magick or following her heart? 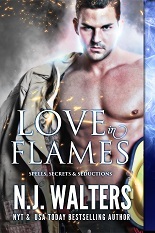 
A spell ignites a fire nothing can extinguish.


Esther goes along with her friend’s candle-magic spell calling for a lover because a one-night stand just might help take her mind off Ryan Jameson. Her father died in the line of duty, and she has no plans to lose her heart to a firefighter who faces danger on a daily basis, no matter how hot he is. But it seems futile to resist when the spell starts to work its magick.


For as long as Ryan can remember, he’s had dreams of a woman with pale blue eyes, and when finds her in Burnt Cove, the connection between them is instantaneous. But the woman of his dreams seems bound and determined to keep him at arm’s length.


When a spell goes awry and gives them one night together, it’s all the opportunity he needs to convince her they’re meant to be.

are you gonna have a fan signing event?

is this available in the Philippines?