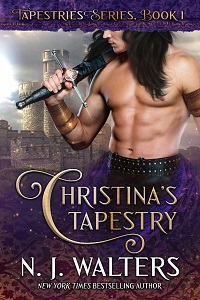 Captivated by a lush tapestry she sees in a shop window, Christina Beaumont impulsively buys it, never imagining how that one action will change her life. The magical tapestry not only transports her to a world that resembles medieval Earth, but also into the arms of two massive warriors who both want to claim her.


Jarek and Marc, brothers of the House of Garen, are elated to discover the tapestry has delivered Christina to them, but ancient tradition dictates that they must compete for the right to be her husband. Both separately and together, the two will indulge Christina in every sensual way possible, taking her to passionate heights beyond even her most intense fantasies.


As the time for Christina to choose between the two men draws near, she is confronted with another option: she can return to her own modern world. Fearing their loss, Jarek and Marc will join forces to convince Christina to stay with them, even as they fight a rival family for the right to keep her as their very own . . .

This is a revised edition of a previously published book.
SMASHWORDS * AMAZON * NOOK * KOBO * 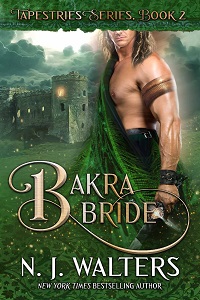 
After witnessing a gruesome murder, Jane Smith has watched her life crumble around her. Her only solace is the stunning and mysterious tapestry she discovered at a thrift store. When the image stitched into the tapestry magically comes to life one night, Jane finds herself transported to a mystical Medieval world, where two massive warriors declare their intentions to cater to her every sensual desire.


Zaren and Bador are stunned to realize that the prophecy of the tapestry has come true and brought Jane to them. The brothers willingly accept their duty to indulge her in every possible form of passion. But Jane’s arrival has also attracted the attention of rival warriors, who will go to any lengths to steal her from the Bakra brothers and claim her as their own.


As Jane adjusts to this frightening but enthralling world, Zaren and Bador risk all to protect her—even as they use all their sexual skill, separately and together, to take her to unimagined sensual heights. Because the time for Jane to choose is drawing near, and the Bakra brothers must convince her to abandon her former life—and take one of them as her loving husband for all time . . .

This is a revised edition of a previously published book. 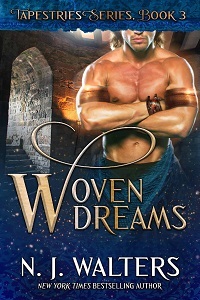 
Forever beaten and abused by her cruel brothers, Genita Craddock has only managed to endure it by escaping into the imaginary world of the tapestry she created, one that features her brothers’ sworn enemies, the enigmatic Bakra brothers. But when she learns of her brothers’ plans to marry her off to a ruthlessly and brutal clan, she knows she must flee. Stealing away into the night, she unknowingly stumbles onto Bakra land—and into a world of unimagined pleasure.

Scarred and maimed from a battle with the Craddock brothers, Jarmon Bakra knows chances are slim that he and his twin brother, Garrik, will find a bride. So the two are stunned when they discover a beautiful young woman wandering on their land—especially one so open to their amorous advances. As they indulge her in every imaginable form of sensual bliss, hoping to secure her as their own, they also sense that the woman is harboring a dark secret that could somehow harm them and their family. 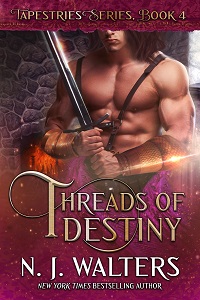 
When a magical tapestry brought a beautiful and loving bride into his brother’s life, Marc Garen could not have been happier, even though he’d hoped to win her for himself. But lately his feelings of emptiness have threatened to overwhelm him, as their buoyant happiness is such a stark reminder of the loneliness that haunts his soul. Then a new tapestry appears and hurls him into a strange and violent world—and into the arms of a woman who has haunted his dreams and carries the promise of the love he so longs for.


Kathryn Piedmont is a brave and beautiful scientist, and she’s put her own life at risk to save two men who were part of a scientific experiment and are now marked for death. As the three find themselves trapped and facing certain execution, Kathryn is convinced their fate is sealed—until Marc, the ruggedly handsome warrior of her fantasies, suddenly appears in the flesh and magically transports them to safety.


With all of them now safe in Marc’s world, the three men in turn and together share Kathryn’s bed, each of them intent on satisfying her every sensual need—and each of them compelled to try to make her his own. But Marc knows that Kathryn is the one woman who can quiet the powerful stirrings in his body and his heart, and he will take her to incredible heights of pleasure to claim her for himself and make her his own for all time… 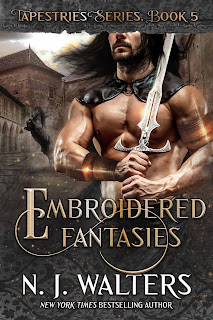 
With her abusive ex-husband safely behind bars, Roxanne Sykes is trying to carve out a quiet life for herself. Just as she’s beginning to feel free to explore her new possibilities, word reaches her that her cruel ex has been released from prison. When he shows up at her door bent on destroying her, it’s only through the magic of a well-loved tapestry that Roxanne is whisked away to safety—and into the world of a warrior she’s known only from her fantasies.


Radnor Craddock has known only a life of violence and brutality at the hands of his older brothers. Now that they have fallen in battle, Radnor and his twin brother Sednar can finally put their house in order. Just as their efforts are bearing fruit, fate smiles upon them again by delivering a potential tapestry bride to their doorstep. Well aware of what they must do to win her hand and her heart, the brothers dedicate themselves to granting Roxanne every imaginable pleasure, driving her to sensual heights unlike any she has ever known. 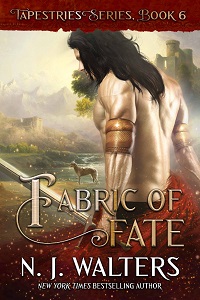 
Having given everything to her career, Audrey Brennan is suddenly forced to confront how empty her life has become when an illness lands her at home for extended bed rest. But before she can take stock and figure out what to do next, a beautiful and magical tapestry whisks her away into the arms of two gloriously sensual warriors. Audrey’s certain it was all just a dream brought on by her medication and exhaustion, but knowing she has denied herself too many pleasures, she decides to indulge herself in the fantasy for as long as it will last.


As the brothers devote themselves fully to winning Audrey body and soul, she finally comes to understand that both the men and the choice facing her are real. And with time running out, Audrey must decide whether to return to the unfulfilling life she once knew or give herself over to the promise of this strange new world filled with endless passion and enduring love… 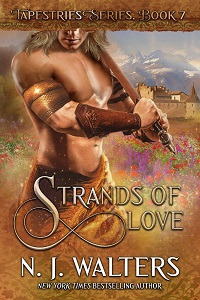 
Tied to the land in a way that only another Texan can understand, Samantha Calloway is facing mounting debts and a merciless drought as she struggles to save the farm that’s been in her family for generations. Unwilling to surrender to an unscrupulous neighbor who offers her a way out, Samantha is left hoping for a miracle when she’s stunned by the mysterious appearance of two hulking, otherworldly warriors on her land—men who stir an undeniable sensual desire in her.


Darian and Jace Hunter are deeply committed to the welfare of their expansive lands and all the people who rely on them, but privately they are also deeply saddened at the prospect of living out their lives without the blessing of a loving woman. They know well the stories of the magic tapestry that might bring them a bride, but they’re still shocked when the tapestry appears—and mysteriously transports them to the world of the beautiful and sensitive Samantha.


As the brothers try to explain the promise of the tapestry to a skeptical Samantha, the trio are suddenly transported back to Javara, where Samantha soon learns that the brothers are as deeply dedicated to the land as she is—and also dedicated to unleashing the power of their passion to bring her to sexual heights she’d never imagined. And as she’s confronted with a choice between returning to her home alone or forsaking it all for a chance at a loving life with Darian and Jace, they will stop at nothing to entice her with every glorious erotic pleasure and unquestioning devotion to win her heart and a lifetime of unending love . . .
SMASHWORDS * AMAZON * NOOK * KOBO *

I really think this would sold out!

i love the plot of this book!