Alexandra's Legacy was my first werewolf book. I instantly fell in love with them. And while the Legacy Series is mostly about werewolves, there is a very special vampire who plays a huge role in their world. 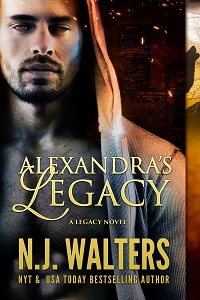 The truth could get her killed.

Alexandra Riley’s predictable world is turned upside down when she discovers she’s the half-breed daughter of a legendary alpha werewolf—a sought-after prize to some, an abomination to others. The tall, dark stranger who bursts into her father’s garage shatters any illusion that she can continue with her normal life.

From the second Joshua Striker, enforcer for the Wolf Creek pack, sees Alex, she becomes a distraction he can’t afford. He’s come to the city to bring Alex to the safety of the pack. That’s it. But who is going to keep her safe from him? Because the wolf inside him is demanding he claim her—now.

From city streets to the mountains of North Carolina, the pair must evade bounty hunters out to kill any werewolf they can, wolves who want to claim Alex, and purists bent on eradicating half breeds. And with all this going on, Alex still has learn what it means to be a wolf and deal with the overbearing male determined to keep her safe.