The Spells, Secrets & Seductions trilogy is all about magick and what happens when a spell cast by an inept witch and her two friends doesn't go exactly as they'd planned. 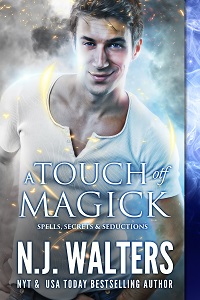 There’s nothing practical about this magick

Rhiannon Sparks isn't a very good witch, so when she slips up during a spell and calls for true love instead of a lover, she doesn't think anything will come of it. But it seems that love has arrived along with Rhiannon's newly unleashed powers, and she'll have to learn how to handle both or risk losing it all.

Deputy Ryland Stone is a realist. He believes only in what he can see and touch. But when he gets his hands on Rhiannon, sparks fly—literally. He can’t explain the instant connection they have, but Rhiannon’s explanation challenges everything he knows to be true.