The next 7 days is all about the Hades' Carnival series!


Welcome to Hades’ Carnival, where a group of immortal shapeshifting warriors are imprisoned in their animal forms on a carousel.

Cursed by the very goddess they served—The Lady of the Beasts—in order to keep them out of Hell, now the warriors are being offered a chance at freedom and redemption. And it will take a very special woman to free each warrior.

Once free, they must stay alive for 24 hours if they want to save themselves from Hades once and for all. 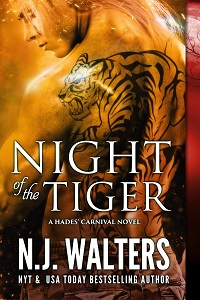 Night of the Tiger

Five thousand years ago, in order to be saved from the horrors of Hell, shapeshifting warrior Roric was imprisoned in his animal form on a carousel. Only one woman’s touch can release him. After that, all he has to do is stay alive for twenty-hours, and his soul is safe from Hades for all eternity. But is the woman who sets him free a distraction sent by Hades?

When graphic novel illustrator Aimee Horner visits a traveling carnival, she’s drawn to an abandoned carousel and its carved white tiger. One touch of her skin against the massive beast, and Aimee’s world is changed forever.